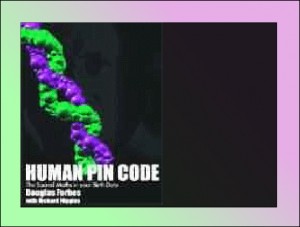 The following extract is from the book “Human Pin Code: Relationships” by Douglas Forbes.

“The power of the DNA Pin Code is that it gives us access to our true selves. It does not discriminate nor does it condition us to be anyone other than who we truly are. Importantly it teaches us to love unconditionally. When we understand ourselves we learn to accept who we are, we come to terms with our strengths and our limitations. This acceptance leads us to be tolerant of ourselves and this tolerance leads to tolerance of others. Ultimately it leads to love.” ~~ Douglas Forbes

Douglas Forbes is the creator of the DNA Human Pin Code. He grew up in central Africa before coming to live in South Africa when he was in his teens. The DNA Pin Code has been developed after more than two decades of study and tens of thousands of case studies.

“Enjoy your similarities and understand your differences.”

Douglas also advises that “… it is important the DNA Pin Code is used with integrity, as it has the power to uncover the workings of humankind in a way we have never seen before.”

The day we are born becomes our template. Once you understand, accept and love yourself you have the capacity to do the same to your fellow human. Since this knowledge is the essence to understanding yourself and improving your relationships with yourself, life per se and interaction with others becomes less traumatic and “drama”-free. People respond positively to the truth you are living.

People consult when their lives are in crises. The Pin Code analysis indicates what important lessons the person is ignoring or refusing to learn. “What you resist you attract.” The consulter is guided to understand his/her potential and “hot-buttons” which in turn enables him/her to manage critical periods.